Here are the eight (8) JEE Main important questions from center of mass and linear momentum, which account for almost all the questions asked in JEE Main on this topic.

Listen through the audio podcasts and read through the solution steps on each of the question type and then corresponding practice JEE Main and NTA Abhyas questions at acejee.com > Dashboard > Center of Mass & Linear Momentum > Important Questions 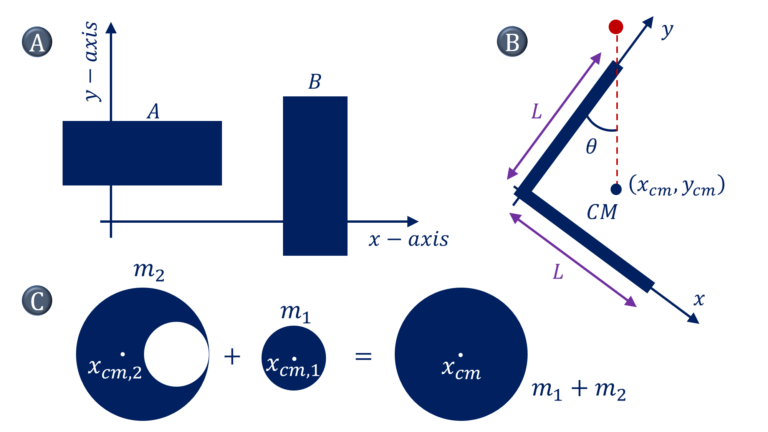 Given information (directly or indirectly) about the velocity of the particles of a system, determine the linear momentum of the system 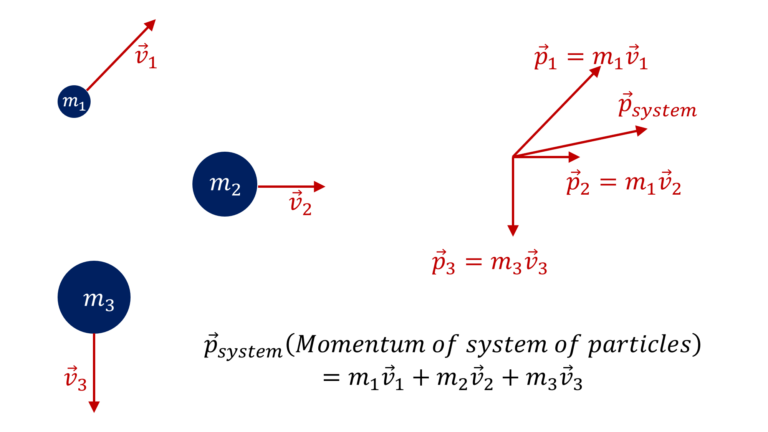 A) Given two or more masses moving away from each other, for example, a cannon on a train firing shells with some relative velocity or a mass exploding into two or more pieces, determine the velocity of the involved masses after the event.

B) Given two or more masses gently coming together along the horizontal direction with no net external forces in that direction, for example, a man walking along a buggy jumping on it, determine the velocity of the involved masses after the event.

C) Given that a system (such as a spaceship) is continuously losing or gaining mass at a constant rate (i.e. $\cfrac{dM}{dt}=$ constant), determine its instantaneous acceleration 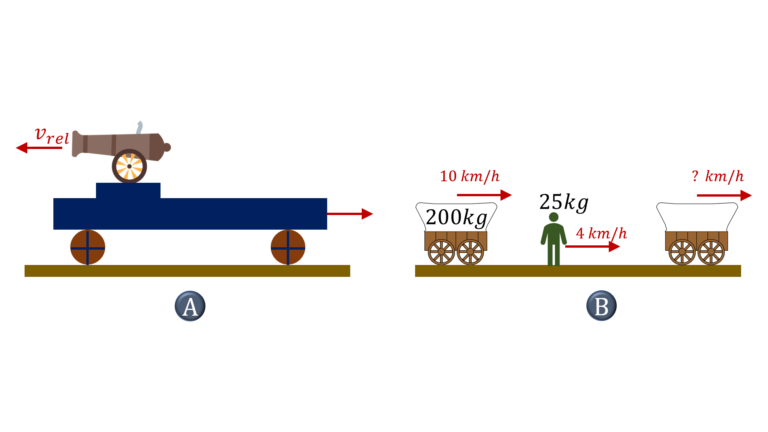 $\color{green}{\text{Solution Steps – A}}$
Since there are no external forces in the horizontal direction, $P_{system,x,initial} = P_{system,x,final}$.

$\bullet$ In case of cannon, on a train (mass $M$), firing shells of mass $m$, at a relative velocity of $v_{rel}$ (with respect to the cannon, in its state before firing) in opposite direction to the motion of the train,
let’s say that the velocity of the cannon $+$ train system just before firing the first shell is $u$ towards the right and after firing the first shell, let’s say that the velocity of cannon+train (of mass $M-m$) is $v$,

which means that the velocity of shell will be $v_{rel}-u$ towards the left as seen by the observer on the ground,

Now, $P_i,x = P_f,x$, i.e linear momentum of cannon + train + shell system along the horizontal just before and just after the firing of the shell would remain the same, as there is no external force in the horizontal direction

$\bullet$ In case of a mass $m$, traveling through air and exploding into two (or more) fragments of masses $m_1$ and $m_2$, the momentum of this particle or system of fragments, during the explosion event will remain unchanged as there is no significant impulse acting on this system of particles during the small duration of explosion event.

Note that, while there is gravitational force $mg$ that is acting on this system, even during the explosion, impulse due to this force i.e. $mg \delta t$, can be neglected as duration of explosion event $\delta t$ is very small.

Note that in case of man jumping on buggy, if you are worried about the frictional force and resulting impulse that will act on the man+buggy system in the horizontal direction, remember that impulse due to frictional force would be negligible as long as the moment of inertia of wheels is relatively small.

$\color{green}{\text{Solution Steps – C}}$
If the system is gaining mass at the rate $\cfrac{dM}{dt}$, then for the duration $dt$, if we consider the system comprising of the spaceship of mass $M$ (at that instant) and dust particles of mass $dM$, then since there are no external forces, the linear momentum of the system will remain conserved over this time interval $dt$, i.e.

Now dividing both sides by differential time duration $dt$, we get

B) This may be followed by the kinetic energy of one of the masses getting converted into potential energy, in which case, establish the desired information about the final state, for example, the bob of the pendulum at rest is elastically hit by a mass and you might be asked to determine the maximum height that the bob of the pendulum would climb 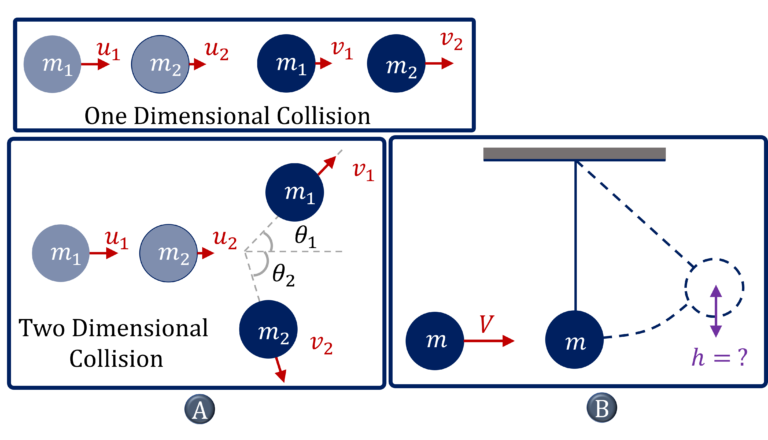 $\color{green}{\text{Solution Steps – A | One Dimensional Elastic Collision}}$
$\bullet$ If there is no (or negligible) impulse due to external forces in the direction of motion, the linear momentum of the system of colliding particles/masses would remain constant,

$\bullet$ If there is no (or negligible) impulse due to external forces in the plane of motion of particles, then the linear momentum of the system of colliding particles/masses would remain constant along both the dimensions

This is a quadratic equation in $v_1$, and for $v_1$ to have real roots, the determinant of this equation should be $\geq 0$, which will then give us the limits on angle $\theta_1$

$\color{green}{\text{Solution Steps – B}}$
Once we know the velocity of masses after the collision, we can use conservation of mechanical energy, if there are no other forces (other than the conservative forces) that are doing work on the mass of interest. 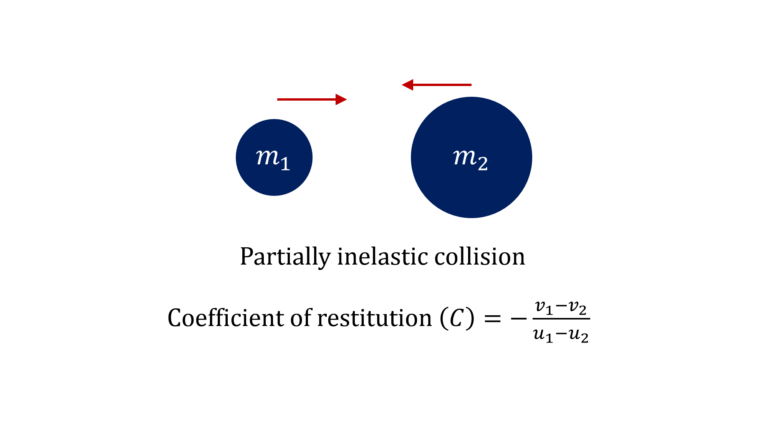 $\color{green}{\text{Solution Steps}}$
In such partially inelastic collisions, only linear momentum remains conserved, meaning that we have only one equation to work with.

In such a scenario, to be able to determine $v_1$ and $v_2$, we might be provided with another equation in the form of coefficient of restitution for the partially inelastic collision

or,
you might be provided some information on the kinetic energies of the masses after the collision

$\color{blue}{\text{Important Question Type No. 20}}$
There are 5 different ways questions, involving completely inelastic collision’ (wherein masses stick to each other after the collision, i.e. $e =0$), might be structured

D) Given that two rigid bodies with smooth surfaces (for example, two smooth spheres) collide with their relative velocity at an angle from the normal to the contact surface (i.e. the line of action of impulse between them), and given that the coefficient of restitution $e$ is zero along the line of action of impulse, determine their final velocities

E) Given that two rigid bodies undergo a completely inelastic collision with motion obstructed in one direction say vertical direction and free along other, say along the horizontal direction, determine the loss in kinetic energy of the system (Note: Impulse between the two bodies has a component along the two directions). 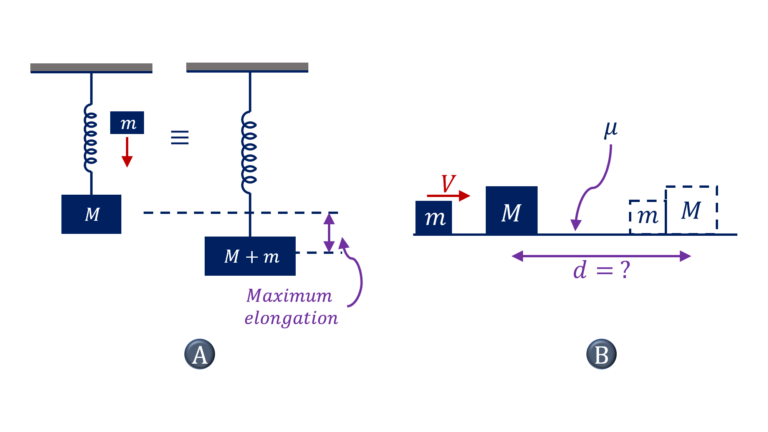 $\color{green}{\text{Solution Steps-A}}$
$\bullet$ During a completely inelastic collision, linear momentum will remain conserved and the masses stick together afterward, which means, that they will move with the same velocity after the collision

$\color{green}{\text{Solution Steps-B}}$
$\bullet$ Once we know the velocity $v$ of the combined mass after the collision, we can use the work-kinetic energy theorem to determine the unknown

Now, since there is no external force in the plane of motion of these 2 masses, linear momentum along two conveniently chosen mutually perpendicular directions $x$ & $y$ would be conserved,

Or, we can write these equations in terms of initial speeds of two masses, the angle between their initial velocities, final speed, and angle that the final velocity of the combined mass makes with, say, the initial direction of motion of $m_1$
5 variables, 2 equations. So the value of 3 of these 5 variables must be known for us to find unknown 2.

$\color{blue}{\text{Important Question Type No. 22}}$
A) Given a constant force or given a force as a function of time $t$, determine the change in momentum of a particle over a given time duration $t$ (time duration may be provided indirectly) 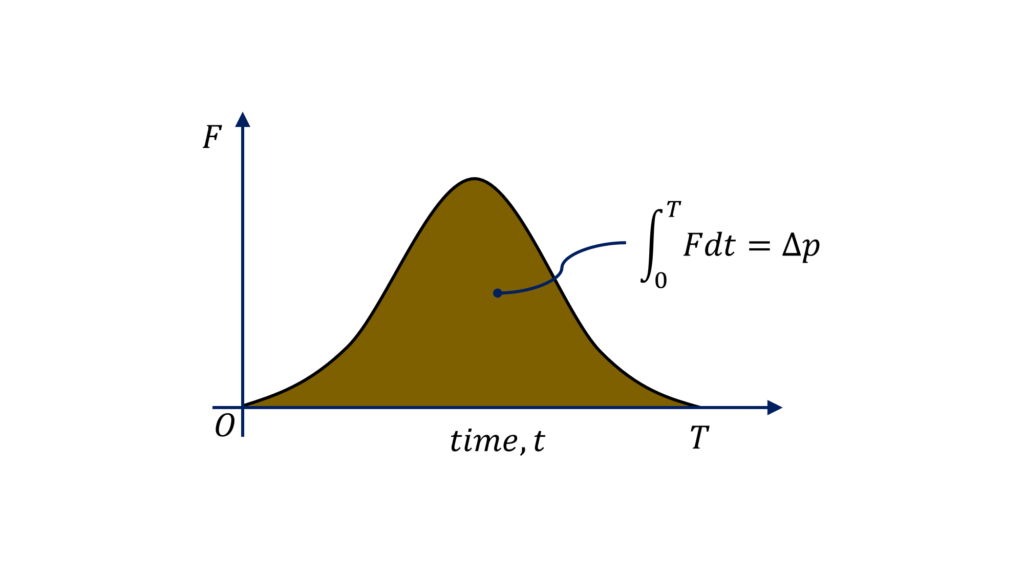 Practice Previous Year JEE & NTA Abhyas Questions
$\color{blue}{\text{Important Question Type No. 23}}$ Given that particles with speed, $v$ are colliding elastically with a stationary surface at the rate of $n$ particles per $m^2$ second, determine the average pressure, $p$ exerted on the surface. 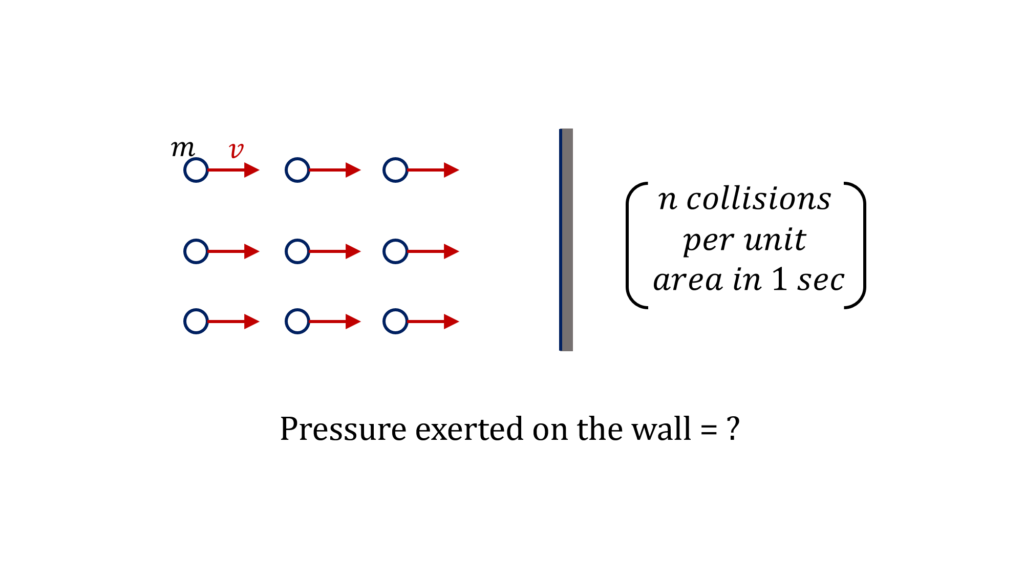 For all question types that you can expect in JEE Advanced and JEE Main, please purchase ‘Rankers Choice‘