With that, let’s start with types of circular motion for which you might want to carefully examine the video and carefully look at the involved forces and accelerations

In uniform circular motion, the ‘speed’ of the particle is constant. In other words, while the direction of the velocity is changing, it’s magnitude is constant. And this means that its angular velocity (number of radians covered per second) is also constant.

So what does this mean for its acceleration?

Well as we will see later when discussing kinematics of circular motion, there is NO acceleration in the direction of the velocity but there is an acceleration perpendicular to it, which is, as we will shall see later, always pointed towards the center of the circle and hence the name centripetal acceleration

Now before we get into the kinematics of circular motion, let’s understand the difference between two similar terms circular motion and rotational motion

Difference between Circular and Rotational Motion

Circular motion typically refers to the motion of particle along a circle while rotational motion refers to rotation of a rigid body about some axis. Note that the speed of different particles of the rigid body is different.

Let’s begin with particle in uniform circular motion and let’s determine the acceleration of this particle which is moving at constant speed. 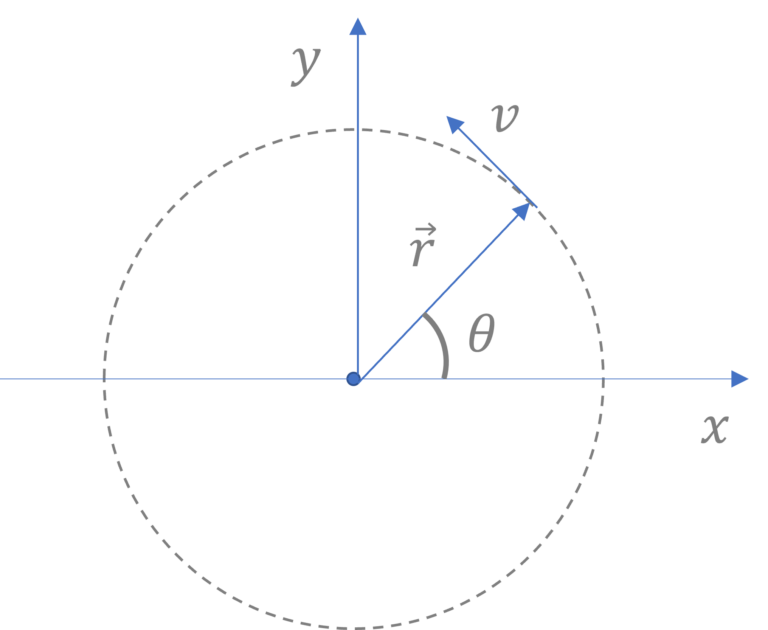 So, it’s acceleration at that position and time would be $\cfrac{d^2 \overrightarrow{r}}{dt^2}$

Note that the magnitude of $\overrightarrow{a}$ is $\cfrac{v^2}{r}$ and it’s direction is $- \hat{r}$ i.e. pointed towards the center and hence the name centripetal acceleration

Now let’s examine the accelerations in a non-uniform circular motion.

Here in this animation a particle is undergoing circular motion in vertical plane with string tension $T$ and gravitational force $mg$ acting on it. Note that since there are no dissipative forces, total mechanical energy of the particle remains constant i.e. $U + K = $ constant at all times. And as you will expect, kinetic energy $K$ will be maximum at the bottom and potential energy $U$ will be maximum at the top.

Given that a mass, tied to one end of a spring of spring constant $k$, is rotating in a circle with constant speed $v$ or angular velocity $\omega=\cfrac{v}{r}$. How would you determine the radius of circle, given that the natural or free length of the spring is $l$? 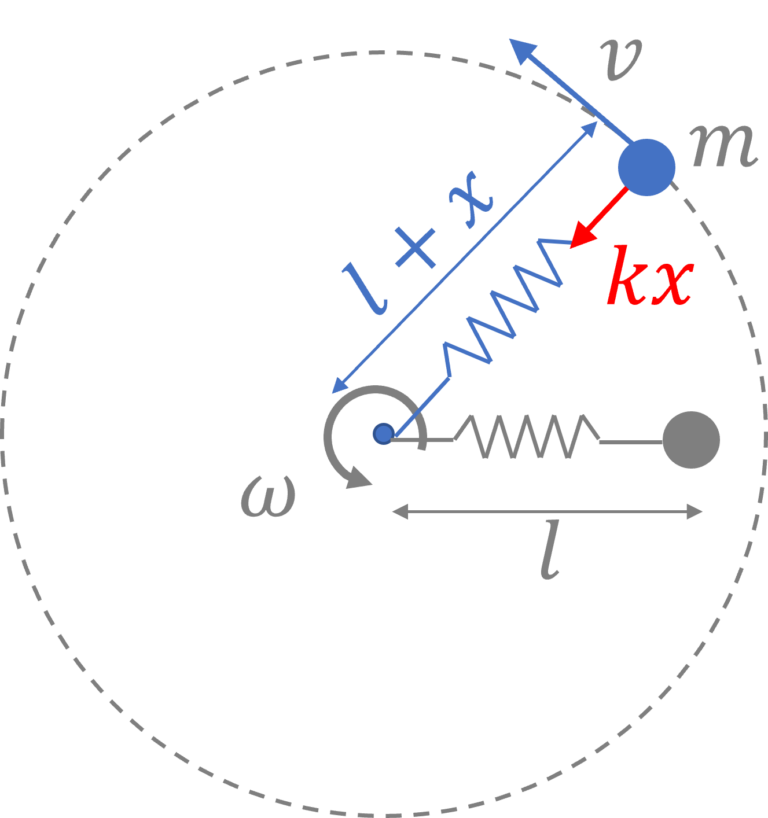 We are interested in finding $l+x$ where $x$ is the amount by which spring is stretched.

So, let’s start with writing the force acting on the mass

$F = -kx$, with minus sign indicating that the force is a restoring force and as such, it will be pointed towards the center of the circle. Going forward we will drop the minus sign.

Now, given that the particle is moving around the circle at speed $v$, it will have a centripetal acceleration $a _r= \cfrac{v^2}{l+x}$

Now, as per newton’s 2nd law, force acting on the particle $F$ and its acceleration $a_r$ must be related by the relation $F=ma_r$, So we have $kx = m \cfrac{v^2}{l+x}$, solving which we will get $x$ and thus the radius of circle traced by the particle will be $l+x$.

With that let’s explore the motion of conical pendulum moving in a circle.

Let’s say that the string makes an angle $\theta$ with the vertical.

So, there are two external forces acting on the mass $m$, gravitational force $mg$ pointed vertically downwards and tension $T$ acting along the string as shown.

Solving the two equations we can determine the desired unknown. 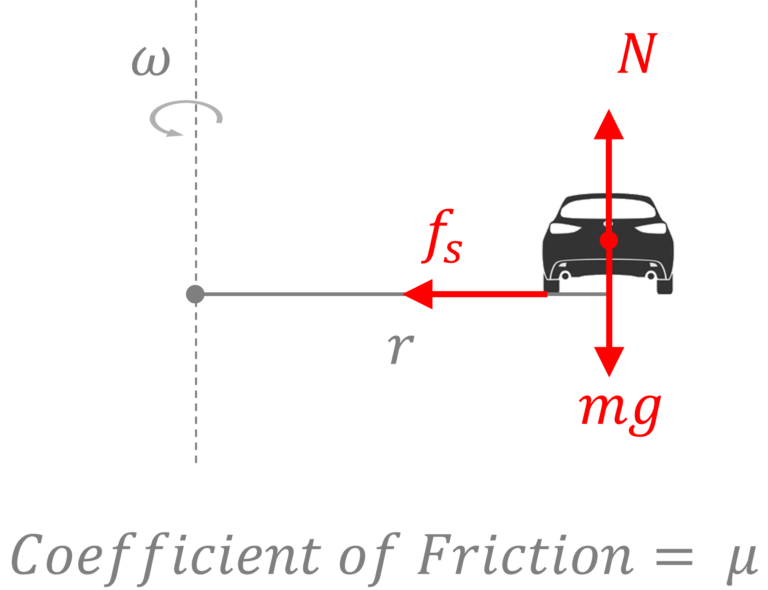 Given that the coefficient of friction $= \mu$, let’s find the limiting speed of the car (beyond which the car will slip outwards)

Now, let’s see how the scenario changes a bit when the car is on a banked road 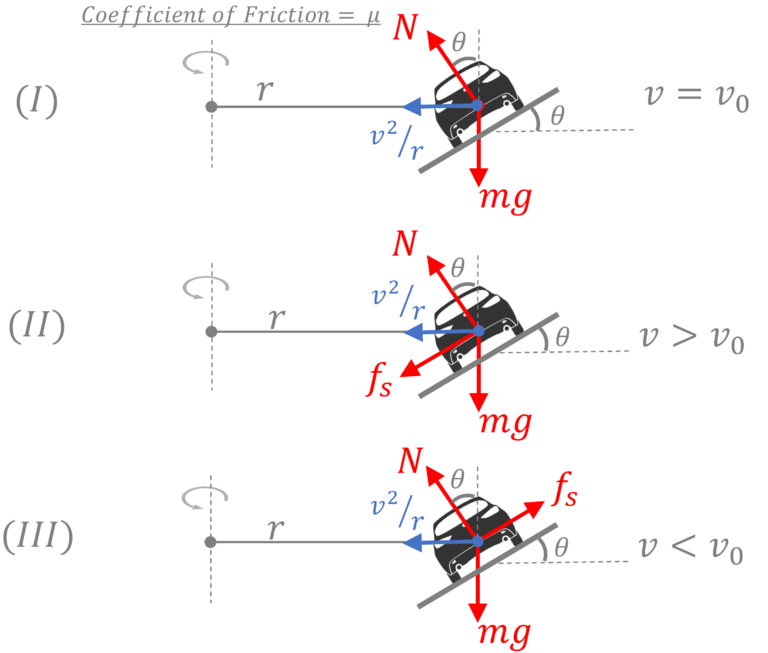 There are 3 possible scenarios depending on the speed of the car, $v$.

I) For certain speed $v_o$, there is no friction force between the car and the ground

II) For $v>v_o$, frictional force would act down the incline as shown

III) For $v<v_o$, frictional force would act up the incline as shown

So, let’s begin with establishing $v_o$ for which frictional force, $f_s = 0$

For $v> v_o$, $N \sin \theta$ will not be able to provide the needed centripetal force and the car would have tendency to slip outwards (up the incline) and as such a frictional force would kick in. Now, the two equations in the vertical and horizontal direction would become

Solving the two we can find the desired unknown. Note, to find $v_max$ at which car is about to slip, use $f_s = \mu N$

We trust that you will be able to write equations for the 3rd scenario on your own.

With that, now let’s explore the motion of a daredevil’s bike tracing a vertical circular path at a constant speed 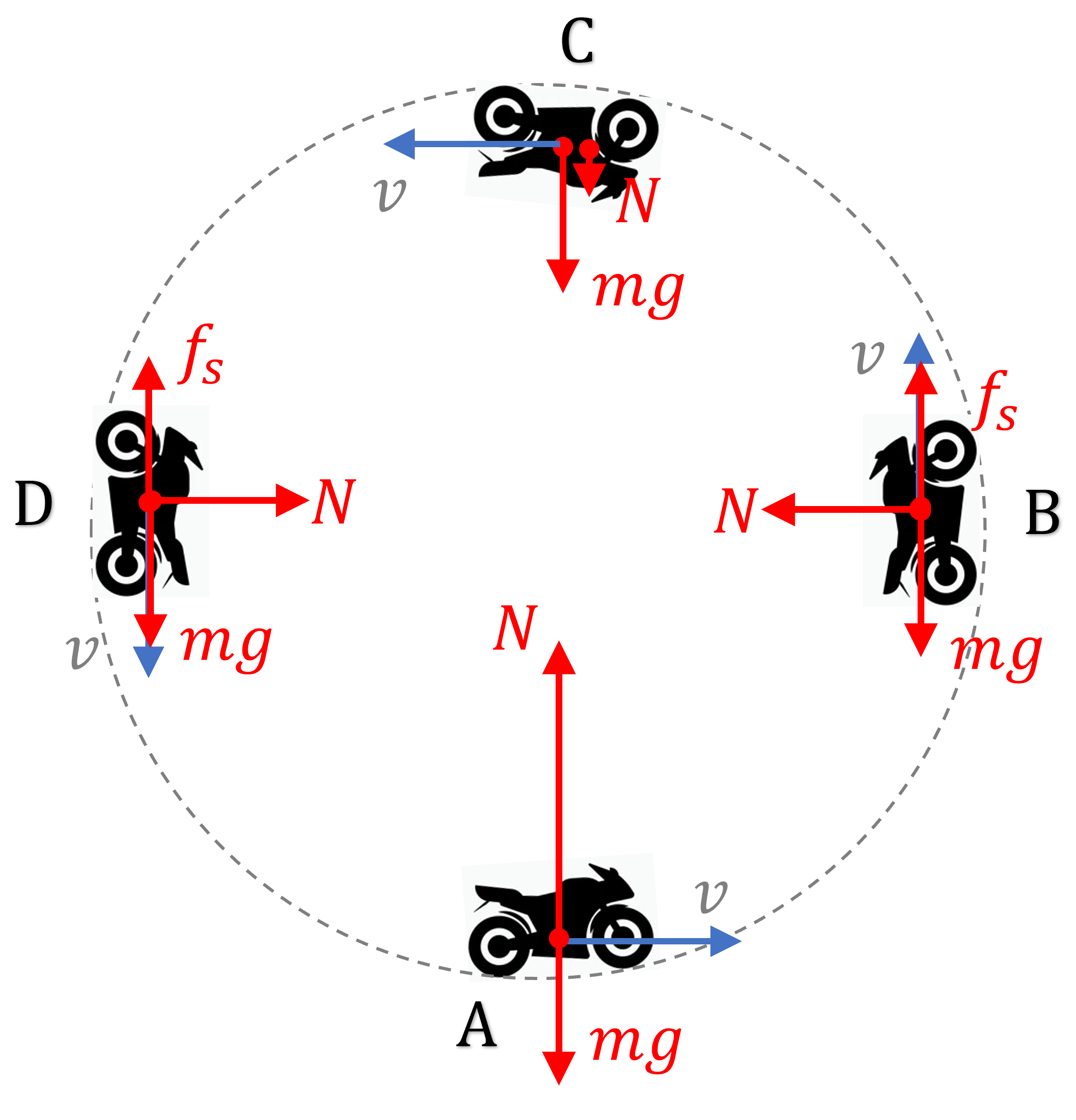 With that, we will now move to non uniform circular motion

So let’s go ahead and look at some examples of non uniform circular motion in horizontal and vertical planes. 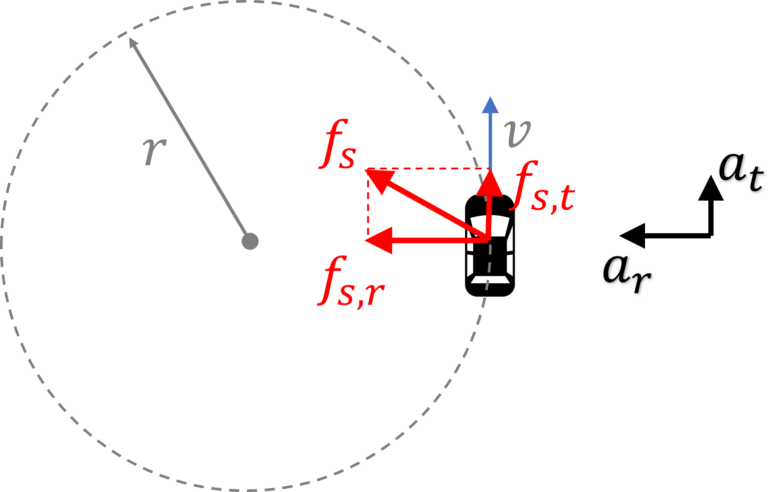 Here is the particle is moving under the influence of gravitational force $mg$ and tension $T$. And since there are no dissipative forces involved here, the total mechanical energy ($=U+K$) will remain constant.

So, what is the minimum speed that the particle should have at the bottom, i.e. $v_b$ such that it completes the circle.

As discussed earlier in the section on kinematics of circular motion, acceleration vector of the particle at time $t$, is given by

And that concludes the discussion on circular motion. Hope it helped. Do drop a comment if you have any questions on this topic or have any suggestions for us.