Our crash course students have been scoring high in JEE Main under the guidance of Vikas Sir (IIT Delhi), who is also behind the development and recent release of ‘JEE Main 2022 – Physics Important Questions‘.

Note that the JEE Main 2022 exams are expected to be scheduled in Feb, March, April, and May. Please check the NTA website for the latest information.

The syllabus contains two Section- A and B, Section – A pertains to the Theory Part having 80% weightage, while Sections – B contains practical component (Experimental Skills) having 20 % Weightage.

Physics and Measurement (1 to 2 questions)

Kinematics and Vector Algebra (1 to 2 questions)

Center of Mass, Linear Momentum and Rotational Motion (2 to 3 questions)

Fluids and Elasticity (1 to 2 questions)

Heat and Thermodynamics (2 to 3 questions)

Oscillations and Waves (2 to 3 questions)

Wave motion. Longitudinal and transverse waves, speed of a wave. Displacement relation for a progressive wave. Principle of superposition of waves, a reflection of waves. Standing waves in strings and organ pipes, fundamental mode and harmonics. Beats. Doppler Effect in sound

Conductors and insulators. Dielectrics and electric polarization, capacitor, the combination of capacitors in series and parallel, capacitance of a parallel plate capacitor with and without dielectric medium between the plates. Energy stored
in a capacitor.

Current and Electricity (1 to 2 questions)

Electric Cell and its Internal resistance, potential difference and emf of a cell, a combination of cells in series and parallel. Kirchhoff’s laws and their applications. Wheatstone bridge. Metre Bridge. Potentiometer – principle and its applications.

Ray Optics: Reflection and refraction of light at plane and spherical surfaces, mirror formula. Total internal reflection and its applications. Deviation and Dispersion of light by a; prism; Lens Formula. Magnification. Power of a Lens. Combination of thin lenses in contact. Microscope and Astronomical Telescope (reflecting and refracting ) and their magnifying powers.

Communication Devices: Propagation of electromagnetic waves in the atmosphere; Sky and space wave propagation. Need for modulation. Amplitude and Frequency Modulation, Bandwidth of signals. the bandwidth of Transmission medium, Basic Elements of a Communication System (Block Diagram only).

Familiarity with the basic approach and observations of the experiments and activities:

1. Vernier callipers-its use to measure the internal and external diameter and depth of a vessel.
2. Screw gauge-its use to determine thickness/ diameter of thin sheet/wire.
3. Simple Pendulum-dissipation of energy by plotting a graph between the square of amplitude and time.
4. Metre Scale – the mass of a given object by principle of moments.
5. Young’s modulus of elasticity of the material of a metallic wire.
6. Surf ace tension of water by capillary rise and effect of detergents,
7. Co-efficient of Viscosity of a given viscous liquid by measuring terminal velocity of a given spherical body,
8. Plotting a cooling curve for the relationship between the temperature of a hot body and time.
9. Speed of sound in air at room temperature using a resonance tube,
10. Specific heat capacity of a given (i) solid and (ii) liquid by method of mixtures.
11. The resistivity of the material of a given wire using metre bridge.
12. The resistance of a given wire using Ohm’s law.
13. Potentiometer (i). Comparison of emf of two primary cells. (ii). Determination of internal resistance of a cell.
14. Resistance and figure of merit of a galvanometer by half deflection method.
15. The focal length of; (i) Convex mirror (ii) Concave mirror, and (ii) Convex lens, using the parallax method.
16. The plot of the angle of deviation vs angle of incidence for a triangular prism.
17. Refractive index of a glass slab using a travelling microscope.
18. Characteristic curves of a p-n junction diode in forward and reverse bias.
19. Characteristic curves of a Zener diode and finding reverse break down voltage.
20. Characteristic curves of a transistor and finding current gain and voltage gain.
21. Identification of Diode. LED, Transistor. IC. Resistor. A capacitor from a mixed collection of such items.
22. Using a multimeter to: (i) Identify the base of a transistor (ii) Distinguish between NPN and PNP type transistor (iii) See the unidirectional of current in case of a diode and an LED. (iv) Check the correctness or otherwise of a given electronic component (diode, transistor or IC).

In JEE Main 2021 physics papers, there were 30 questions per physics paper, out of which one could attempt a maximum of 25 questions (20 – multiple choice questions and 5 out of 10 Integer type questions).

And as there were 4 allowed attempts (Feb, March, July and August), across these four attempts there were 24 physics papers or 720 unique questions.

Now, to score 99 percentile one had to score more than 75 marks out of 100 (on an average). And we have no doubt that you are aspiring for the same, which brings us to the current topic. Where should you focus more and what questions you should master to make sure that you get the desired percentile.

Well, there are interesting patterns emerging out of an in-depth analysis of all the papers in JEE Main 2021, 2020 and 2019. And we (team of IITians at AceJEE) are glad to bring you all the information to help you strategize your preparation in coming months. So, we wish you the very best and do follow the recommendations.

But before we jump into important question types, let’s take a quick look at the chapter wise distribution of questions. 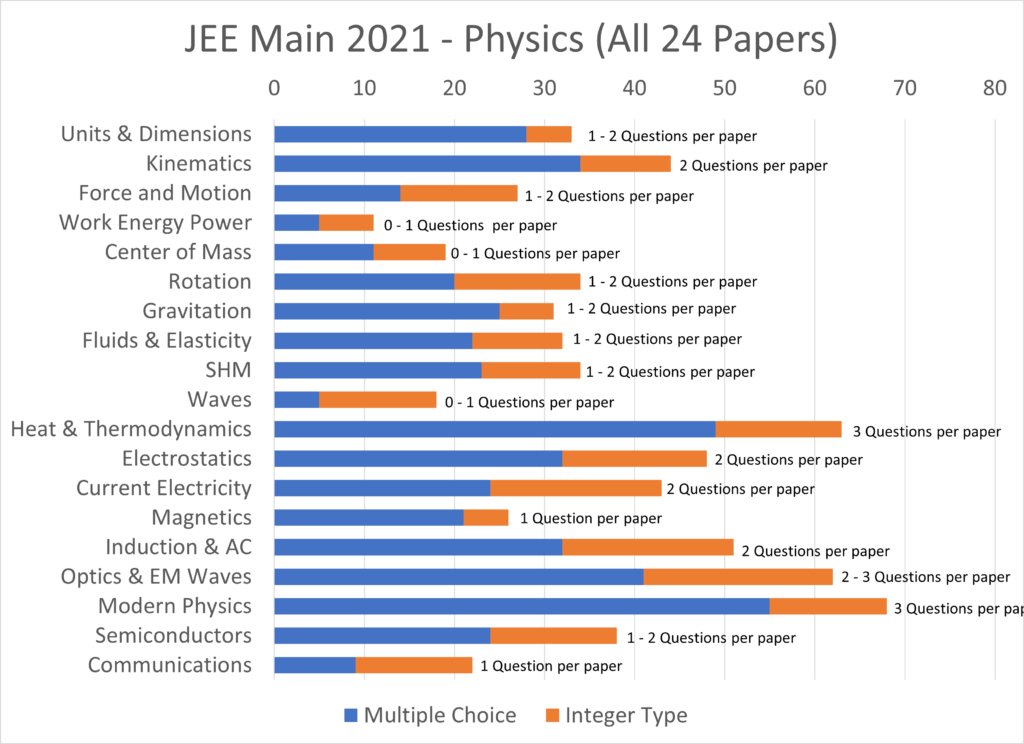 Top 5 chapters simply based on number of questions asked from that chapter are Modern Physics, Heat and Thermodynamics, Optics, Induction & Alternating Current, and Electrostatics / Kinematics (including vector algebra).

Now, while this is helpful at the high level, it doesn’t help you prepare smarter to ensure that you score high. For that you need to know the types of questions that are being asked more often than others. And in all honesty, you have to be good at solving these question types to be able to score high percentile in JEE Main physics (no exceptions). Note that the types of questions asked in mock tests of most of the coaching institutes are not aligned with the questions asked in JEE Main examinations.

So let’s being with the question: How many different types of questions are there and how many of them you need to master to score 75+ marks.

What are 'Important Question Types'?

Well there are about 750 different types of questions that have been asked or could be asked in JEE Advanced, JEE Mains, NTA Abhyas, HC Verma, Cengage, DC Pandey etc. And from the perspective of JEE Advanced you should have gone through them all at least once but from the perspective of JEE Mains, good news is that examiners ask questions from a fairly limited number of question types and interestingly 124 different types of questions alone can get you more than 70 marks (out of 100), which means that you can now plan your revision so that you practice at least these 124 question types multiple times and you can be rest assured that you will do very well. 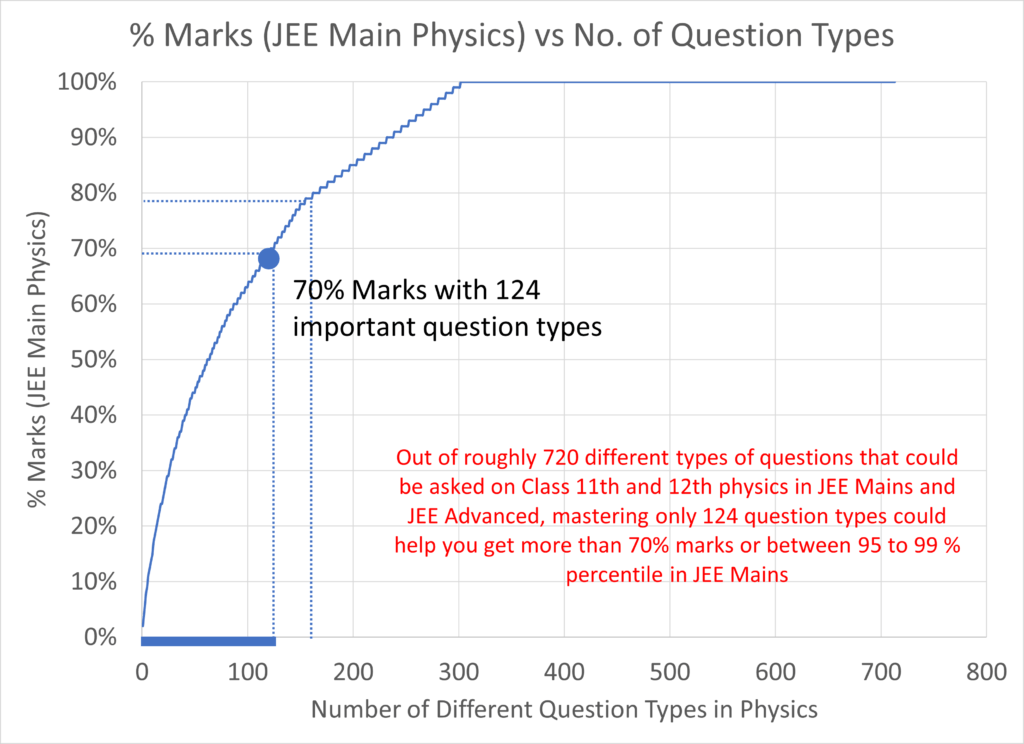 Brief about our founder (Vikas Sir) 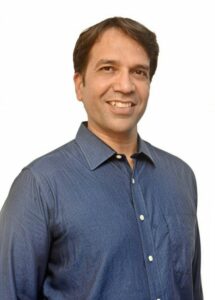 Don’t miss out on the opportunity for structured revision and excellent coaching and guidance from Vikas Sir.